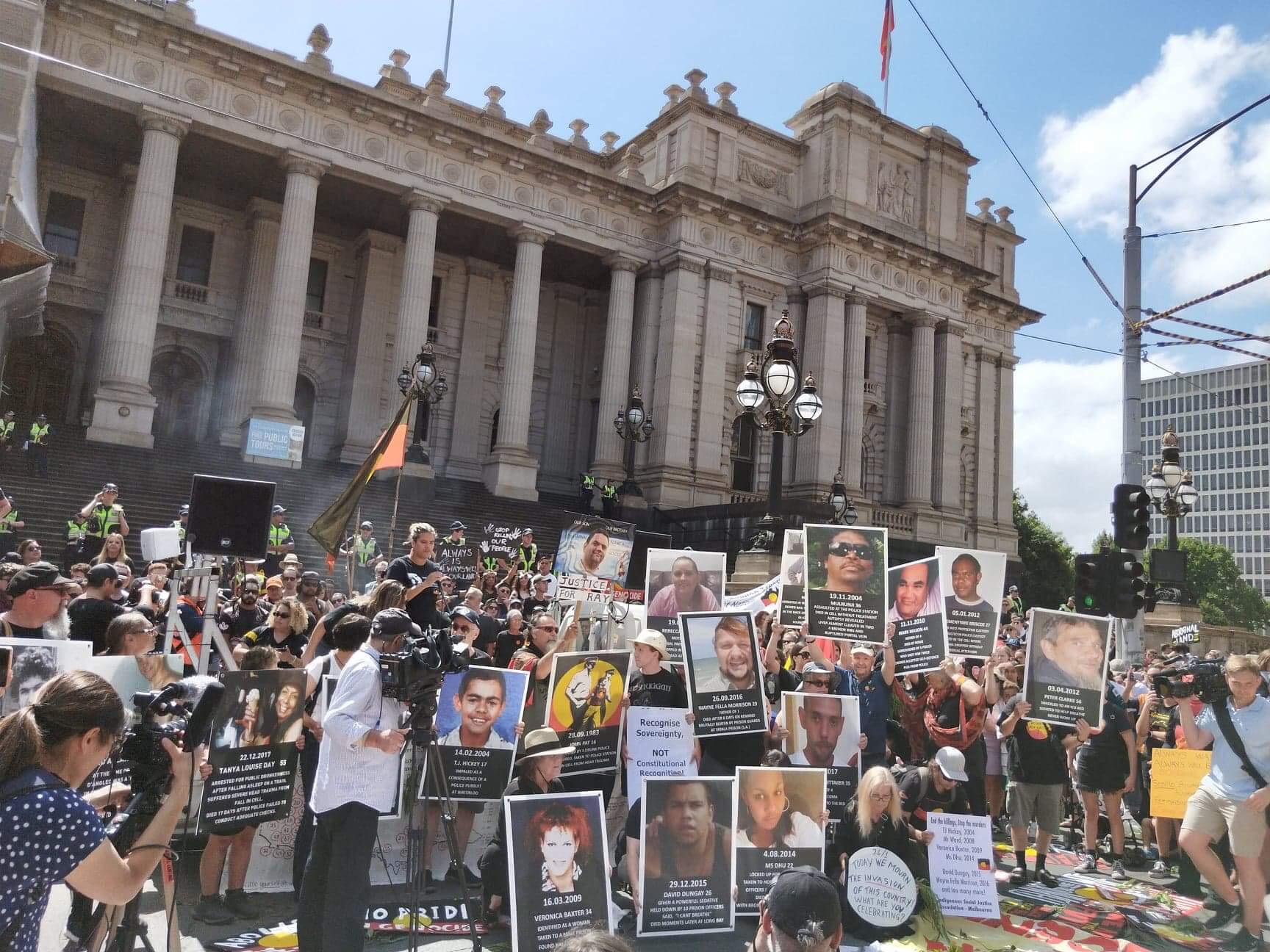 Always was! Always will be! Aboriginal land!

We watched ‘Rabbit Proof Fence’ and yet it was the only time I cried during the learning of that whole unit.

Aboriginal history is still taught in a very sanitised manner in schools. I don’t know if this is right or not. But something tells me that the government is too afraid to really teach kids the truth…

7 years on, I stand amongst a crowd gathered outside Parliament house. Every minute our numbers multiply until you can no longer see the end. Uniformed police officers stand in lines on the parliament steps and around the parameters of our gathering. Sunglasses hide their eyes, they stand with their arms crossed or on their hips, unsmiling. Most wear high visibility vests and I see armed officers in bullet proof vests riding horses. I feel sick. Why are they here? What do they think we’re going to do? But as the crowds continue to gather, I put them out of my mind.

Everyone is gathering around posters and banners that have been laid out on the vacated tram tracks and road outside parliament. A woman is laying out gum leaves on the ground and smoke is blowing in the wind. In front of the steps, a truck is parked, all cameras are pointed in that direction where microphones are set up and the speakers wait to address the crowd. As I look around, I notice members of the crowd already holding banners and posters. Many wear t-shirts to also show their support. The young and the old are here. People of all different nationalities and all walks of life gather in support of the same cause. 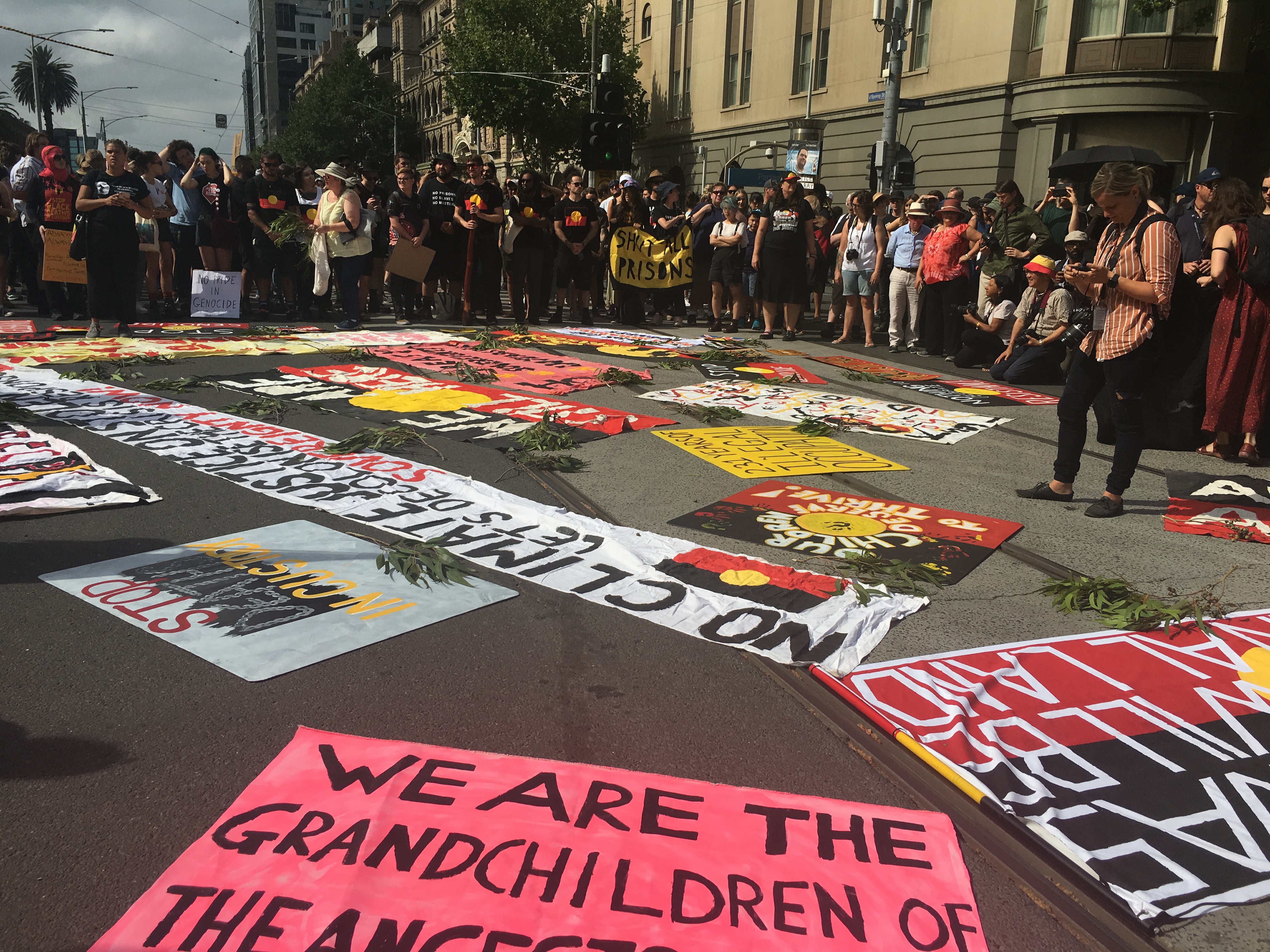 January 26this what the far right and many others claim to be Australia day – a day for celebration! They are too ignorant or stubborn to admit that in 1788 on this day, the First Fleet arrived and began the mass genocide of the traditional owners of the land. The First Fleet who claimed the land Terra Nullius (‘land belonging to nobody’) and who treated Aboriginals like animals to be slaughtered. The British settlers who claimed the land as their own and set out to destroy the lives of an entire race for generations to come. If it wasn’t clear… I will never except January 26thas a day of celebration. This is a day of mourning, this is invasion day! It marks over 230 years of the oppression of our first nations peoples.

Every year protests are organised across the country. It seems the biggest rally is always in Victoria, Melbourne’s CBD. News broadcasts last night would tell you numbers were upwards from 10 thousand but the rumours from people at the rally (about 80 thousand +) are much more accurate. Being amongst those crowds yesterday, it was impossible to see where the march began and ended. Like I mentioned earlier, I was struck by the vast array of people who attended, from infants to seniors. Students and activists. Leaders and families. All different colours, nationalities and cultures. All walks of life. We march in solidarity.

Before we begin, we listen to elders and other community members offer words of encouragement as well as words of despair. They are tired of fighting for their rights, they need our help. I listen to them tell stories, through tears, of the suffering them and their loved ones have endured over the years. They recount the hurt and the anger for the members of the community who have been murdered or who have taken their own lives. Five children aged between 12 and 14 have committed suicide in the past fortnight and it breaks my heart. The speakers point out the people holding posters of community members who have died in police custody and I am brought to tears. Politicians and their guards (the police) are responsible for the implementation and enforcement of the systematic oppression of indigenous Australians. 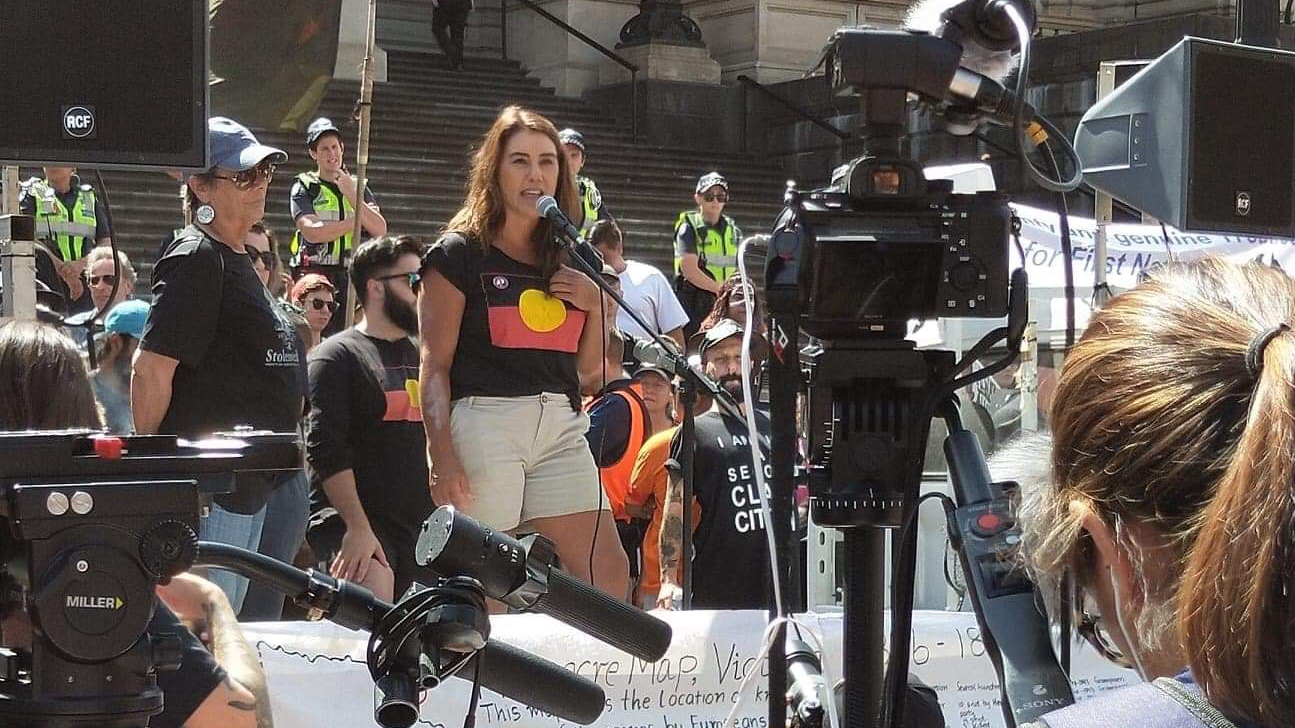 This is not just our history, this is happening today, in modern Australia!

Even with all of us gathered here in mourning and also to protest, we are aware that still a large population around the country is celebrating Australia day. There is a parade happening in another part of the city, people are throwing backyard barbeques and there is a big citizenship ceremony being held in Canberra, headed by our Prime Minister; Scott Morrison. They fail to acknowledge the truth that they are standing on Aboriginal land. They fail to realise that this ‘holiday’ does not unite Australians, it divides us, and it excludes a huge chunk of the population.

In the news the main reports about the Invasion day rally doesn’t focus on the important messages that we were trying to get across about the treatment of Aboriginal Australians. Instead it zeros in on the clash that occurred where members of the far right tried to ambush our peaceful march and cause disruption.

But in truth support for this movement is vast and growing every year. Support extends outside our country all the way back in the U.K. London – we received images of them displaying a banner that reads “ABOLISH AUSTRALIA DAY!”. Even the people whose ancestors were responsible for the invasion can see that this is not a day for celebration. Now what does that tell you?

Invasion day protests will continue to be held every year. People will continue to fight this fight and numbers will only increase. Soon the government is going to have to except that if they don’t change, they will lose support from a large chunk of their country and they will forever have to live with knowing that they are responsible for the discrimination and genocide of Aboriginal Australia. 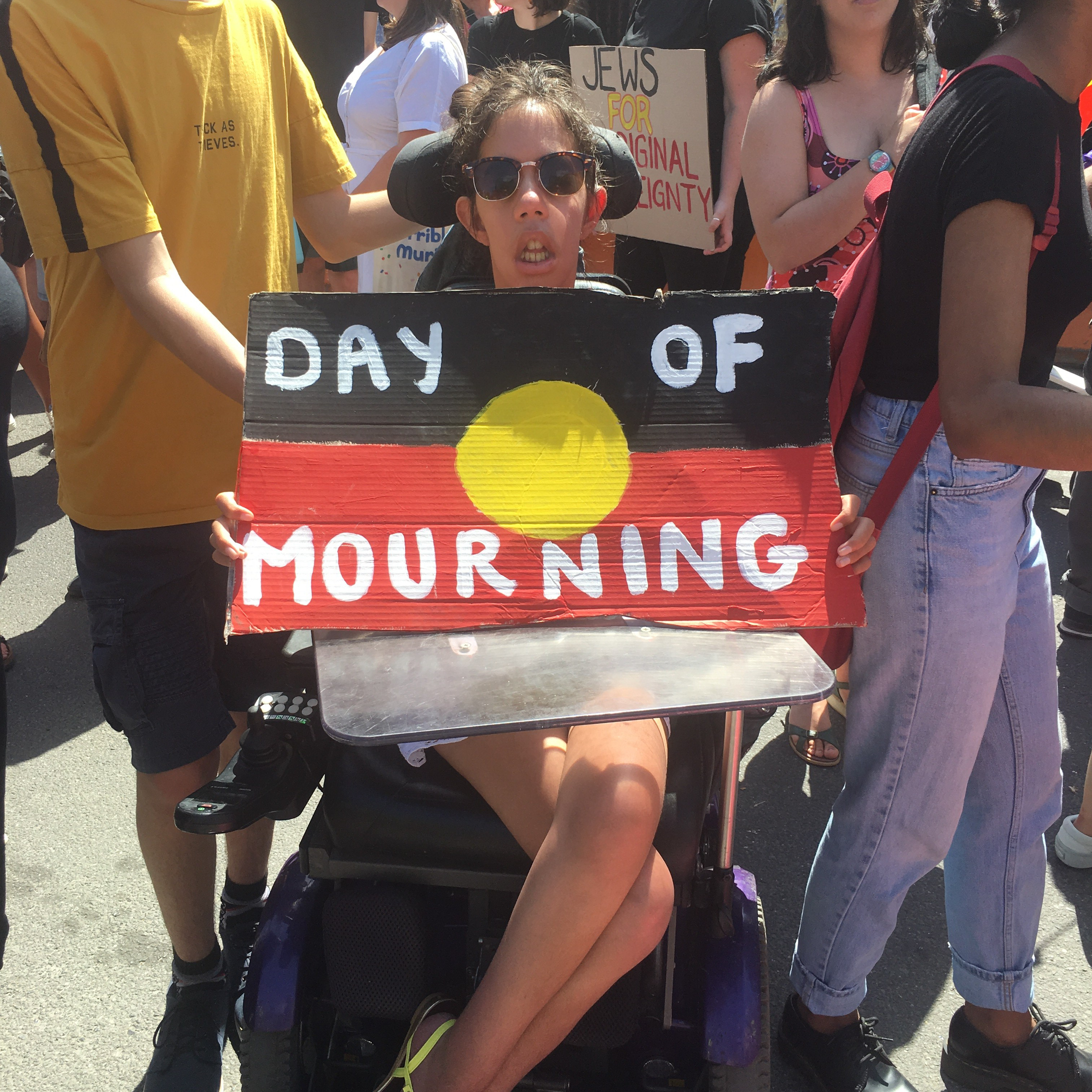