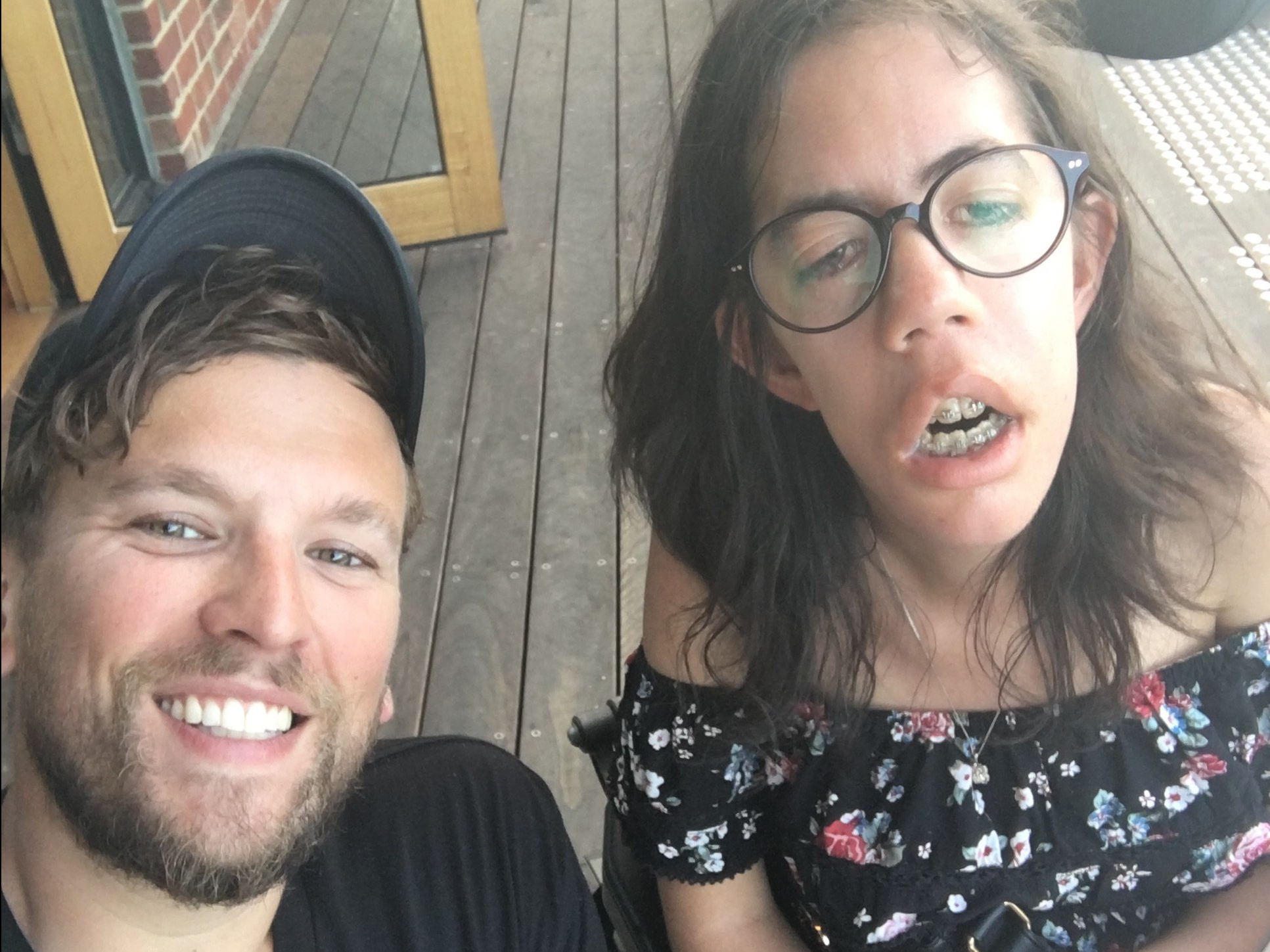 \
Firstly, I absolutely LOVED this book!

I am not a sports enthusiast in the slightest, I don’t even watch wheelchair or Paralympic sports. I haven’t seen a single game and I’m 19. In truth I didn’t come from a very sporty family and if P.E. lessons have taught me anything, it’s that sport in general is not my jam. (The most sport I ever really got into was the AFL on Grand Final day. Yeah, I’m that girl. #fakefan).

In saying that, I am now more intent than ever to start checking out more wheelchair sports. If not because I would actually ever start playing (I firmly believe that is not my stage), it would still be pretty cool to see other people with disabilities, killing the game/s.

While I don’t know much about sports or wheelchair sports, I definitely know who Dylan Alcott is.

3-time Paralympic gold medallist (for basketball and tennis), 4-time Aussie grand slam champion and multi-award-winning athlete. He now holds the world number 1 title in wheelchair tennis. (Hopefully I got all that right, there’s probably more but that’s what I can remember off the top of my head).

Plus, he also happens to be one of the coolest dudes I’ve ever seen, out there living his best life as he should.

I first heard about Dylan Alcott when my mum pointed him out on the news. I believe her exact words were: “Look Claudia, there’s a cute guy in a wheelchair playing tennis” (cheeky). What can I say? He’s easy on the eyes.

I ended up googling him and came across his TedTalk from 2015 – ‘Mainstreaming disability’. I quickly found out that while our disabilities were far from the same, I had shared a lot of similar experiences. Despite him being 9 years older, we were both millennials who grew up in Australia with a disability and immediately I felt a huge comfort in relating to someone who was also doing some amazing things with his life. It’s a new kind of hope.

Dylan has made more of an appearance and impact on my life in the past couple years. I saw him on TV commercials and on ABC’s QandA; which again was a huge comfort. But probably the most profound thing Dylan ever did was launch ‘Ability Fest’ in 2018. You may remember my post from a while back – ‘crossing the bridge’ – about that very event. It still remains the best day of my life and I can’t wait to go again this year. I tried to send Mr Alcott that article, so he would know how much I appreciated it, but he never got back to me. That’s okay, he’s a busy dude.

Since that music festival, I’ve been following Dylan on social media and keeping an eye out for any other cool stuff he’s got up to. In December last year I was scrolling through Instagram when I came across his post about a book signing for ‘able’. I had the book in the back of my mind but thank goodness I saw the post when I did, literally the day before the event. It was stinking hot on that day and everyone in my house was exhausted, so I decided to go it alone.

I was so excited because seconds before I left the house, the parcel arrived with my new business cards. The ones I got printed for my blog to hand out. I was going to give Dylan one and hope that at the very least, he would see the post I wrote about ‘Ability Fest’. I was also really keen to thank him in person for everything he was doing and how he completely changed my life with that one event. Unfortunately, things didn’t go to plan.

Side note; on really hot days like this one, my eyes get really dried out and itchy but ironically, they start to water like crazy. I look like I’m crying but it’s just the heat. This is what started to happen when I arrived at the library where the signing was held.

During the Q and A I mustered up the courage to ask one of my heroes a question. I had to make it good. My question was: “What is the biggest lesson you’ve learnt from having a disability?”.

Now, this is the exact moment that my eyes decided to play up again and so as Dylan was answering my question, I looked like I was tearing up at his ever so inspiring words. Great. What’s more is that’s all I could think about at the time; how ridiculous I must’ve looked. That is why I don’t remember everything he said. If he noticed, thank god he didn’t say anything. This should’ve been a significant moment but instead I only remember some of what he said.

“Well firstly, I’ve learnt stairs aren’t great”, classic Dylan making jokes. “despite being named after quite a few”, this is true. I think he also said something along the lines of there’s always a way to get around things like having a disability. It’s easy for people to make small adjustments to accommodate for people with a disability and there’s always a way for us to actively participate in any activities we desire. If I remember that correctly, it’s certainly an important lesson indeed, for everyone – disabled or not.

After the Q and A, I lined up with everyone to get my book signed. As I tried to remember what I wanted to say to him, I was viciously wiping away tears, willing the water to remain inside my eyes for the remainder of the short time I had to meet him. When I finally approached the table outside where he was signing books, I was relieved my tears had temporarily stopped. But as I was overwhelmed that I was now face to face with the legend himself, I had completely forgotten what I needed to say and instead fell silent.

Of course, he was lovely. He has a very nice demeanour and had I been able to stay a little longer, I would’ve been able to ease into a conversation with someone like him. Upon meeting, he thanked me for my earlier question and asked if I lived nearby. All I could muster up was “no, I live an hour away”. Great. I was stunned when he automatically called me Claud after seeing my name. That’s what my friends and family call me. With my phone in my hand, I was about to ask for a photo (I learned one lesson after my encounter with Carly Findlay that same week). He offered to take it himself and we got a selfie. Yay!

He said goodbye but afterwards I was kicking myself for not telling him what I really wanted which was; thank you.

I showed my signed book to my taxi driver who immediately asked me why my dad had signed it? So funny. I tweeted that the day after I stared reading it which was then retweeted by Dylan Alcott himself. Cool. I may have also started a twitter feud regarding his signature… 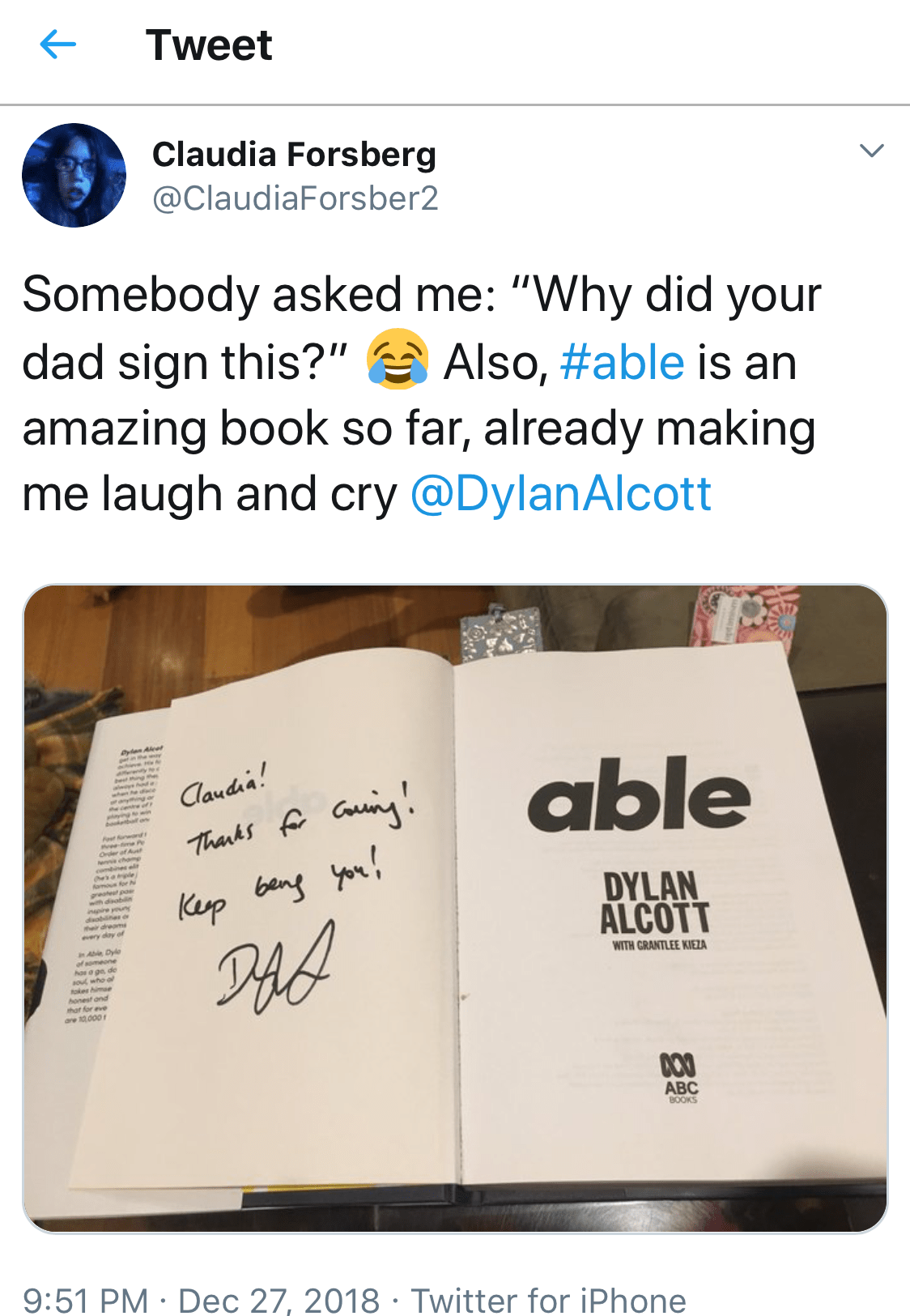 I’ve had ‘able’ on my bedside table ever since and I was super keen to read it next. As I said, I bloody loved it! Dylan made me laugh and cry, but mostly laugh. He’s a funny bloke with some terrific stories that are almost unbelievable.

I would recommend this book to anyone; whether you’re into sport or you’re not. Whether you’re disabled or not. Whether you know of Dylan Alcott or you don’t. It’s an incredibly moving and entertaining documentation of an extraordinary life. I only hope that he keeps doing more and more awesome things.

Dylan has worked in radio and appeared more and more in the media in recent years. That’s what I’m most interested in because that is exactly the area that I want to work in. I truly believe that we need to see more people like us represented in mainstream media so that other generations don’t have to ask that same question when they turn on the TV or radio; “why does nobody look like me?”.

Dylan Alcott is not just an inspiration for people like me, but a pioneer in the disability community. Paving the way for young people, myself included, to not only chase their own dreams and ambitions, but to join the fight for equality and representation.

I hope to do just that. 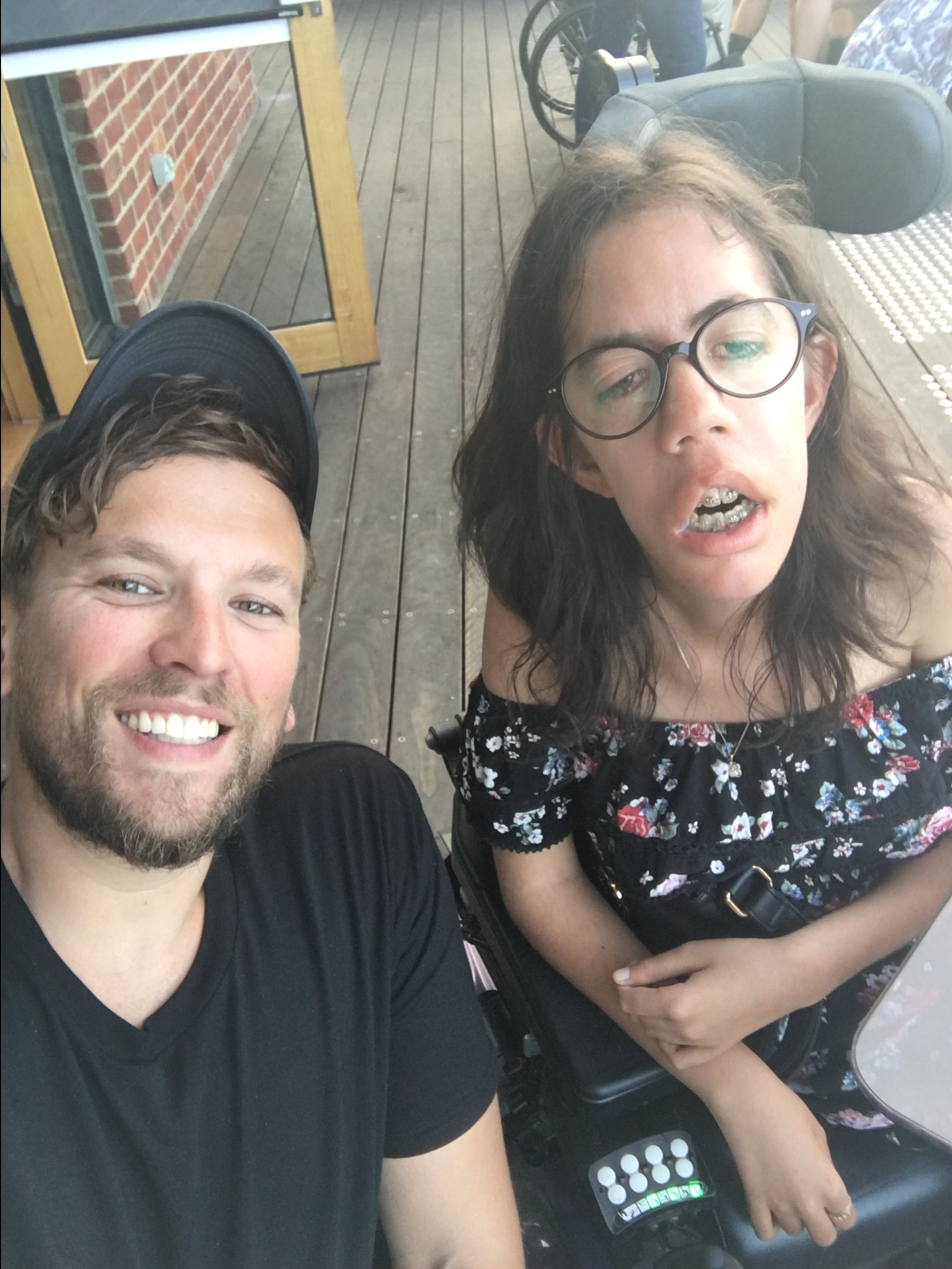