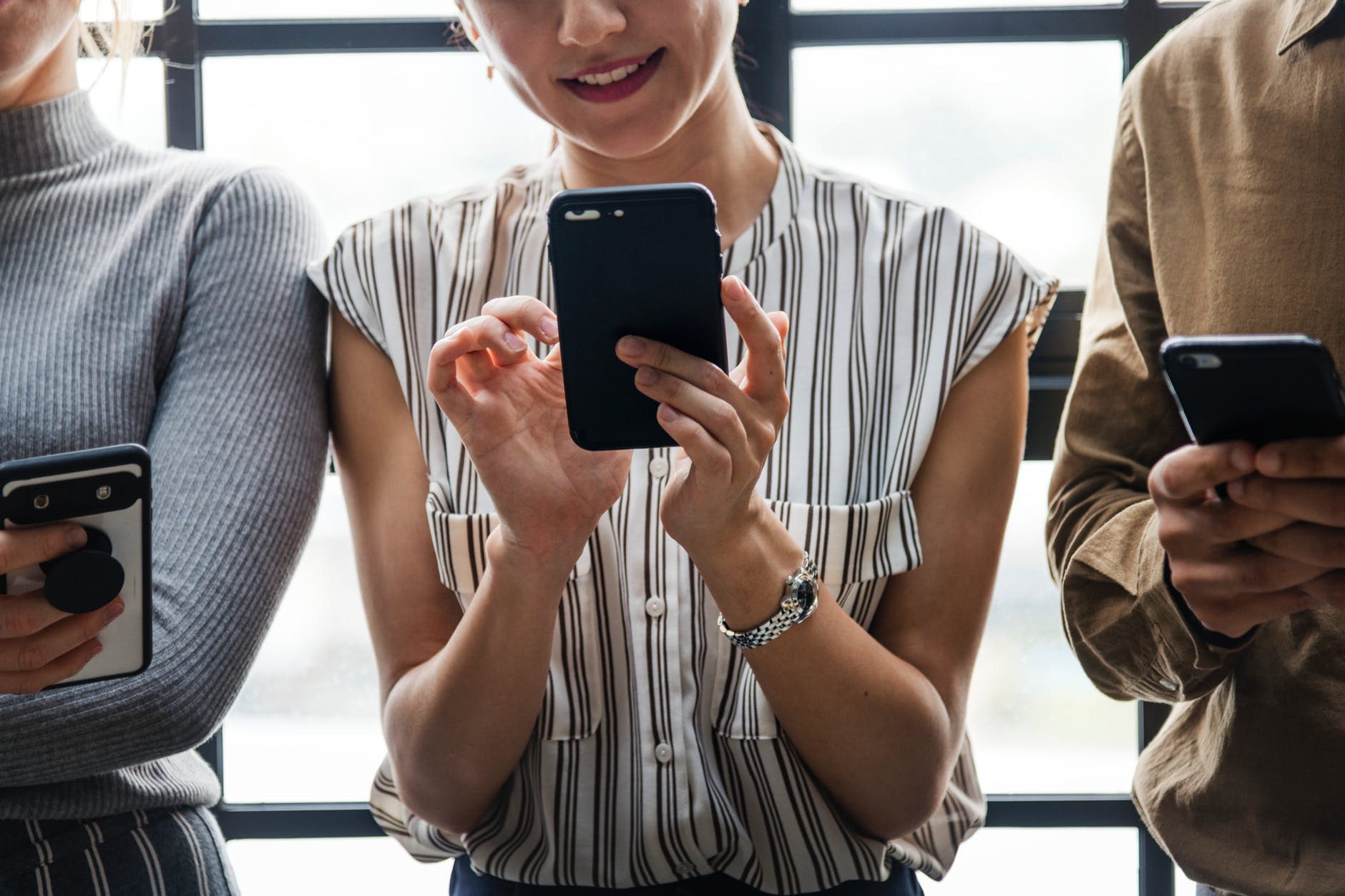 Chained to the game of scrolling

Social media has been the subject of debate for quite some time with many people – mostly older or middle-aged people who don’t understand technology, so they choose to demonise it instead – linking my generation (the infamous ‘selfie generation’) with the growing epidemics of ‘anti-socialisation’, ‘self-obsession’, and ‘idiocy’. All the while blaming social media for its perpetuation.

Before you get your knickers in a knot, I’m not suggesting that all people over the age of 30 don’t understand technology or participate in the hatred that’s spread about the millennial and post millennial generations. I also agree that there are many fundamental problems with social media, most of which I will outline shortly. But I’ve had enough experience in this world to know that just because we don’t fully understand something, does not automatically make it a bad thing.

Facebook, Instagram, Snapchat and Twitter. The ‘big 4’ of social networking. Each platform is designed differently yet all with the same basic premise; to share and connect. The amount of personal information we are willing to put out into the world in this day and age is astounding. It’s now easier than ever for hackers to penetrate what is meant to be our “private accounts”, perverts to have access to young people’s photos, and businesses to target ads specifically at us based on the information we so willingly provide.

If it’s not enough that we plaster our entire lives online for the world to see, it’s never really an honest insight into our actual lives is it? No! Its highly filtered. If not by the actual filters or photoshop we put on our photos, but by the sheer fact that we only post the best parts about our life. Our social medias are one big ‘highlight reel’. In fact, I recently discovered that people go as far as to make two Instagram accounts; one private for close friends where they post their quote “ugly selfies”, and then a public account which is again, another highlight reel, all photos of picturesque locations, perfectly edited to portray an entirely fake life.

Its these highly filtered lives coupled with perfect status updates and tweets that can be so damaging. I too catch myself feeling envy or FOMO (fear of missing out) seeping into my soul when I scroll through my social media feeds and see how much fun everyone but me is having. When I see gorgeous people every day; their tanned bikini bodies living it up on the beach, while I’m at home in shorts and a tee, with my 3-day unwashed hair in a messy bun. (And not even a cool messy bun, I mean an actualmessy bun). Logically, I know that nobody’s life is perfect every single day. A majority of us are not out and about. Most of us are at home doing exactly what I’m doing. Hello? That’s why the oldies call us anti-social, remember?

I say that the filtered content of social media is damaging and the amount of information we share online is dangerous. But truth be told, those aren’t even the worst things about social media. Violence and hatred are perpetuated and spread by social media. These platforms are a tool used by cruel or miseducated groups and individuals to spread sexism, racism, ableism, homophobia and other forms of hatred towards a vast audience. It’s frightening that nowadays anyone can say anything about anything or anyone. People have so much power at their fingertips. But it becomes dangerous when that power is used to hurt, defame or undermine a particular individual or group. Or to influence the wrong people to commit crimes or actions that are considered socially/politically incorrect.

Cyber safety was a topic that became so critical when I was in school that schools had to start implementing programs or enlisting the help of experts to talk to us about the dangers of social media. Cyber-bullying is something that the older generations did not have to deal with, but now has become more and more prevalent. How easy it is for children to inflict pain upon each other using online platforms, pain that leads to devastating consequences, pain that can be inflicted anonymously or in plain view.

Adults are not incapable of online bullying either. Celebrities or people with large followings become so easily targeted with hatred. We think that just because somebody is famous, or we will never directly have contact with them, that it doesn’t matter what we say about them online. The truth is, we are all humans with feelings, and if enough people target somebody with vile and hatred, it’s enough to hurt anyone. Marginalised groups are also targeted online and this is easy because; a) they’re often incapable of defending themselves and b) because targeting a group of people makes it harder for an individual to personally defend themselves. I’ve always maintained however, that the perpetrators of online abuse and prejudice are very sad human beings who have nothing better to do with their lives than to sit online day and night trolling people.

Politicians and other people with an abundance of power can now use social media to influence and manipulate people, exerting even more power. The most powerful man on the planet – Donald Trump – (who also happens to be one of the most outrageous), now has the ability to share his views on any subject in a simple Tweet which will reach millions of people all over the world.

Its easy for people to bully and hurt others online but it’s also easy to spread mis-information online. Many people lack the ability to distinguish opinion from fact, thus opinions are often presented as ‘the truth’. We latch onto the bullshit that’s presented online which can lead to some pretty damning views being imbedded into people’s brains. Once we form an idea, this can often transfer into more dangerous actions.

For example: in Victoria early last year, the news got out that there was a rise in crime rates most of which credited to “African gangs”. This idea was perpetuated by the state Liberal party (under Mathew Guy at the time) via the media and social media. People continued to spread racism towards the African community and there were even a few violent clashes. Later, Victorian police confirmed that crime rates had actually significantly dropped, and only a small percentage of crimes committed in Victoria were committed by people of African backgrounds. A much higher percentage was committed by white folk. Who would’ve thunk it?

Despite all of the evidence that shows the negativity associated with social media, I am one of the first to jump to social media’s defence. I see there is a flipside to every point made so far.

My parents were strict about following the age limit for setting up a social media account. I got my first Facebook account at 13 and in the years following, set up other social media accounts too. I check social media daily and admit to posting on Facebook, Twitter and Instagram at least 3 times a week. I too use filters; posting only the highlights. While I admit a lot of what I might post can be stupid or meaningless, I do believe there are many benefits of social media and I like to think I’m leaning into more of a positive usage of social media.

Apart from the obvious and maybe original intended use for social media (i.e. people connecting online with family and friends), social media is also a great platform for self or business promotion. If you hear the word self-promotion and think it a negative thing, you’re forgetting about linked in – a social media platform specifically designed for people of the same industry to connect with one another and potentially line-up job opportunities through demonstrating an online resumé. We can use other social media platforms to advertise ourselves (depending on the industry we’re in) or our businesses and it’s a great way to reach a much larger audience. I myself benefit from social media by using it to promote my blog and hopefully further my career as a writer.

As someone who finds it more difficult than most to get out and about, I benefit from being able to reach people online. Verbal communication is also a hassle, but social media allows me to communicate ideas clearly and concisely to as many people as I please. This can be the same for most people. I know that we can benefit from online communities (like Facebook groups), which are filled with like-minded people or people going through the same things from anywhere in the world. They can share queries or concerns, information or advice in order to support each other. I myself am part of several, writing, disabled and blogging Facebook groups, each giving me something different and extremely positive.

LGBTQI rights, #METOO, and all the other movements that have popped up all over the world would not have succeeded to such an extent if it weren’t for it riding on the backs of social media platforms. All of the social and political change that we see to this day is a fantastic thing! Social media is a fantastic thing! So long as we continue to use it for positive purposes.

But like they say; with great power, comes great responsibility.