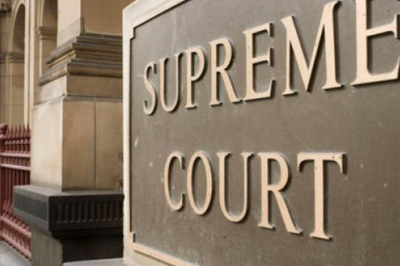 Patrick Hopkins has appeared at the County Court of Victoria to plead guilty to two charges this morning.

The prosecution told the court that on March 3, 2019, Mr Hopkins entered the apartment building at 16 Clyde Street Mall, Frankston.

He is charged with having intent to assault a person within the building.

Mr Hopkins then allegedly proceeded to recklessly cause serious injury to Jake Fleskens.

It is understood that Mr Hopkins and Mr Fleskens were known to each other.

The two men had a disagreement a few days before the offending took place, at Keysborough pub.

They exchanged messages and calls during the afternoon and into the evening of March 2, over the Facebook messenger platform.

It is believed that Hopkins went to Fleskens’ apartment the following day at approximately 12:05pm.

He obtained a meat cleaver which he allegedly used to attack Fleskens, leaving a deep laceration on his right forearm.

As the prosecution read out his summary, Hopkins sat in the dock falling asleep at times.

Hopkins’ defence attorney was tearful when reading out his previous circumstances.

Apparently, he had a difficult childhood, lost some family members, and got involved with drugs at a young age.

“He had the worst injuries, I suppose. That’s why he pleaded guilty” said Judge Pullen.

Hopkins only spoke to plead guilty to both charges.