No, it’s not over! – Students, Parents and Friends of Sunshine College meeting

Some of you may be wondering by now; Claudia, why are you still harping on about this now? We got the funding, it’s over, we did it! Believe me, I thought so too. Now let me tell you a story.

On Monday October 8th, the Andrews government published a media release that stated they would be investing a further $12.75mil into Sunshine College building works. James Merlino visited the school to deliver the good news. We learned that a re-elected Labour government would mean the additional funds would be granted to cover the costs of stage 1 of the building project which includes a “Performing arts centre, Gymnasium, Year 7-8 Learning Building, Carparks, further demolition works and other upgrades”.

I have barely gotten past the introduction and there are already some MAJOR things wrong with what I’ve just said. I will get to that in just a second.

As I sit here typing, I am still trying to wrap my head around all of the points I need to get across and honestly, I have never been so frustrated, and mind boggled in my life.

A previously scheduled Students, Parents and Friends of Sunshine College meeting was cancelled following the media release. We all thought it was over. But after careful consideration of the statements, and a few calculations, we noticed that it was in fact not over. The meeting was back on and people are not happy.

First of all, the reoccurring phrase of Labour’s announcement was “a re-elected Labour government”. You see what Labour has so cleverly done is led us to believe that this funding of $12.75mil was already ours when really, it’s just an ELECTION PROMISE.

That’s right folks, this was nothing more than a bribe, delivered in such a way that was designed to shut us up and get them re-elected this November. We all know election promises are not to be trusted. Just look at the track record of any political party and the promises they made before an election. Very few are carried out to the extent that was specified (if at all).

Now of course, the rebuttal for this argument is that usually parties don’t want to go back on education promises because, well, there would be hell to pay. As current Labour MP for the western suburbs Marsha Thomson told me a few weeks ago, “education is one of the top priorities of the Labour government”. Sure, I can accept that.

What I take issue with is there is no concrete plan in place. We do not have a date for when this so-called funding is to be given to us. We don’t even know where this money is coming from. In a meeting with Victorian Schools Building Authority officials, college principal Tim Blunt could not get a single person to answer that very question.

So, even if Labour is re-elected, who’s to say how long this will drag out. Its already been 12 years since it was first identified that Sunshine College needed re-development.

Labour knows very well this is a safe Labour seat. The chances of them being re-elected are very high. On top of the fact that we have no plan for when we get the funding, Labour also has no incentive to change things here in the western suburbs. It’s been this way for years.

My next most pressing question of all is: Why doesn’t Labour lock in the funding now?

The government cannot lock in any legislation or funding when it is in caretaker mode – a phase that occurs before an election. However, the government is NOT in caretaker mode. They could quite easily give us the funding NOW, no questions asked. What is the difference between giving it to us pre or post-election?

Well, besides the fact that this funding can be used to get Labour elected for another four years. That’s the sick truth isn’t it? Politicians think it’s okay to use funding for decent education facilities as a means for achieving political gain.

But the problem doesn’t stop there. You just have to do the maths.

The government is promising $12.75mil. That is on top of the $21mil already spent. That is roughly $34mil. The budget for the stage 1 was supposed to be $28.5mil. The asbestos at west campus cost $6mil to remove. We are essentially down to just $34mil.

This “additional funding” is just pathetic. Barely getting anything, we are simply back to where we started. I’m sorry but that’s just not good enough.

And by the way, after students and parents quizzed principal Tim Blunt, he disclosed that some of the additional funding was going towards demolishing one of the other campus that is to be vacated (Ardeer or Senior). But of course, the VSBA can’t specify just how much this is supposed to soak up. All they can say is that they will be able to give us the scope after the election.

During the second Students, Parents and Friends meeting held last Wednesday the 24th of October, attendees motioned to form an official committee and we intend to pursue this issue to the end. As information unfolded, it was clear we have a lot of work to do. Committee members have come up with a plan of action for the next 4 weeks until elections. It’s not long, but it’s enough.

Some of the most disturbing photos I have seen since this campaign began were the ones given to me by a year 10 student from the Ardeer campus who also happens to be my own sister. This is a picture of Ardeer students doing band practice. 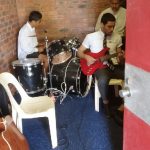 As you can see a band of five students and their instruments are crammed into a small closet sized room but singers in the band have to stand outside the room in the hallway because there isn’t enough space. Wires are difficult to manage, guitars are always bumping into each other, the drums and keyboard are pushed up against the wall and there is no manoeuvre space. The school band doesn’t have a decent music room to practice in. These are the kids of our spectacular school production; SHINE, and even they don’t get decent facilities? What kind of sick joke is this?

To make matters worse we hear about schools like Footscray city college who are being granted $75mil to build new schools when they didn’t even ask for nor did they need new facilities to begin with. Meanwhile, we have to fight for a measly $12.75mil.

What’s clear now is that this is not over. It’s not over until we reach the ballot box and even then, we will not stop fighting. Sunshine College deserves decent facilities, nothing less.